Baccio da Montelupo and the road of ceramics 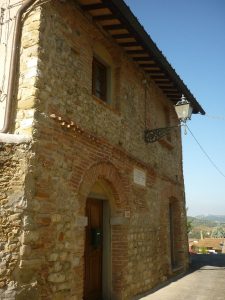 Famous for the evocative wooden crucifixes of Saint Mark and Saint Lorenzo in Florence and for the splendid bronze sculpture of Saint John the Evangelist of the Orsammichele, Baccio da Montelupo, together with the more famous Leonardo da Vinci and Jacopo Carucci, known as Pontormo, was one of the most famous artists who, between the end of the 15th Century and mid 16th Century left the Empoli Valdelse countryside to search their fortune in the workshops of the Florentine court.

Baccio was born Bartolomeo Sinibaldi in 1469 in Montelupo Fiorentino and lived here as a young boy where he developed a passion for art and for ceramics, which during those years had made the town famous. Today, as one walks through the narrow streets of Montelupo, it is possible to see Baccio’s modest house which is an existing example of medieval architecture.

As soon as he became an adult, Baccio left Montelupo and began his studies at the famous Giardino di San Marco in Florence where he met the young Michelangelo Buonarroti and was deeply fascinated by his artistic talent. After the fall of the Medici family, Baccio became a follower of Savonarola and of his spiritual and political vision which visibly influenced his artistic production and saw him concentrate on primary materials such as terracotta and wood.

Although there are few traces left of Baccio in Montelupo Fiorentino, the ceramics tradition flourished and today one can visit the Ceramics Museum and follow the itinerary of the Ceramics Road which illustrates the main places connected to the historic production and also the workshops and atélier spread out over the area where the unique manufacturing processes still continue today.