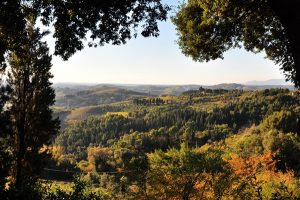 Along the road which leads to San Vivaldo, framed by the beautiful hills of Montaione, Castelfalfi is a typical Tuscan village with its castle, church and red brick houses. Founded by the Longobardi towards the 18th Century as a look-out post over the valley, Castelfalfi was for centuries an important fortress and only towards the end of the XVI Century it became a destination for rest and relaxation for the Medici-Tornaquinci family.

Today, thanks to an important company which has taken care of the restoration of the ancient buildings and transformed them into holiday accommodation, the village maintains its tourism vocation and has been used as a film set for the Italian reality show La Fattoria (The Farm) and for Roberto Benigni’s Pinocchio (2002).

Interesting fact: in the 1970s near to Castelfalfi the fossilised remains of a whale were found which are today displayed in the Montaione Civic Musuem.