Certaldo, the medieval town of Boccaccio 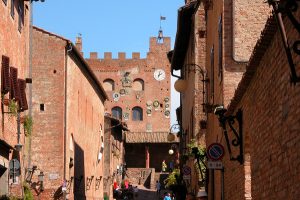 “Certaldo, as maybe you have heard, is a castle in Val d’Elsa in which despite its small size was inhabited by noble and well-to-do men” (Decameron, VI, 10). With these words the famous literary scholar Giovanni Boccaccio described his city during the middle of the XIV Century and although 650 years have passed since then, the historic centre of Certaldo has remained just as it was during the times of Boccaccio.

We don’t know if during the summer of 1313 Boccaccio was born actually in Certaldo or as more recent studies have suggested, in Florence. What is certain is that this small town immersed in the green hills of the Valdelsa represented a very important place for him, so much so that he chose to end his days there. During his younger days Boccaccio was a trader and banker but he became famous thanks to his Decameron short stories on which Chaucer based his Canterbury Tales. Today we remember him amongst the fathers of the Italian language together with Dante and Petrarca. Although Boccaccio never met Dante Alighieri in person (Boccaccio was only 7 when the latter died), it is he we have to thank for the adjective of “Divine” which characterises the Comedy. However, Boccaccio did have strong relations with Petrarca and other humanists of the time and together they transformed the small town of Certaldo into a real cultural centre at European level.

The house Boccaccio died in 1375 was re-built after the terrible bombardment of 1944. It is located half-way along Via Boccaccio, in the heart of the medieval town and today it is the home to the Ente Nazionale Giovanni Boccaccio, a museum dedicated to the memory of the poet and specialist library. Here, after viewing the 14th Century shoes, a curious testimony of the fashions from that era, you can observe the medals created by the maestro Bino Bini for the 6th Centenary of the death of the poet in which the 10 most famous short stories of the Decameron and the kings and queens of every day are represented. The fresco of Pietro Benvenuti depicts Boccaccio at his work table and the copy of his most ancient portrait will help you familiarise yourself with this incredible personality. The most amazing experience will be that of losing yourself amongst the 3500 volumes collected in the library dedicated to him: here you will find some of the oldest printed editions of the Decameron, the short stories which have been translated into almost all the languages of the world and an exhibition of Tractatus Geographicus, the representation of the world in the XIV century…What do 14th Century geography and Boccaccio have in common? That is up to you to discover!

As he wished, Boccaccio was buried in Certaldo in the church which today is dedicated to Saint Jacob and Saint Philip which is also home to the Musuem of Sacred Art. However, the tomb which originally guarded the remains of the poet was destroyed at the end of the 18th Century in compliance with the Leopoldina law which forbid burials inside churches, provoking the bitterness of Lord Byron, a literary colleague of Boccaccio, who mentions the disagreeable event in the IV verse of the Childe’s Harold Pilgrimage. Only in 1949, after careful studies and research, was the poet’s tomb identified and placed once again in the church, marked with a marble headstone sculpted by Mario Moschi. Please note: the remains of the great Boccaccio are not under the headstone but under the small white tile a short distance away.

Boccaccio re-lives in his city

There are many events which during the year take inspiration from the convivial spirit of the famous Certaldo citizen. Every second Friday of the month the Si racconta le novelle del Boccaccio event takes place where the stories of the Decameron are read aloud accompanied by live music. In June you can attend the Cena da Messer Boccaccio with dishes, tableware and entertainment in typical medieval style. For food and wine lovers the Boccaccesca during the first week of October is not to be missed. On a national level, every year in September the Premio Letterario Giovanni Boccaccio is awarded to the best Italian writers and journalists.