The Churches of Poggio Salamartano 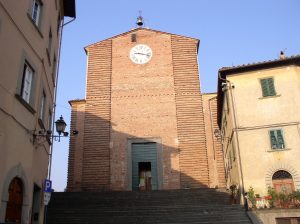 The hill of Salamartano is the highest point of the city, where the Salamarzana Castle stood in the Middle Ages and since the XII Century has been the ancient religious centres of Fucecchio. A short distance from Parco Corsini and from the Civic Museum, here it is possible to enjoy a unique view of the lower Valdarno and of the Cerbaie forests.

Collegiate Church of St John the Baptist
Piazza Garibaldi, 1 – Fucecchio
Proceeded by a ramp of stone steps, the facade of the church which was rebuilt at the end of the 18th Century where the ancient medieval church once stood, was never completed and today is recognised for its bare bricks. However in contrast, the inside of the church is richly decorated with sculptures and details in the Neoclassical style. Here the highly venerated Madonna di Piazza (Madonna of the Square) is conserved (originally located on the corner of the ex-chancellor’s palace in Piazza Vittorio Veneto), together with a XVI Century marble high-relief which according to tradition protected Fucecchio from the plague in 1630 by receiving a dark stain on its face.

Church of San Salvatore
Poggio Salamartano, 3 – Fucecchio
Founded before the year 1000 by Count Cadolo near to the river Arno, the San Salvatore Monastery was rebuilt on poggio salamartano after the disastrous flood of 1106. Restored between the XVI and XVII Century, the church conserves little of its original structures but inside authentic treasures remain, such as the monumental higher altar created by Giovan Battista Foggini, an organ from 1626 and an evocative painting depicting the Immacolata Concezione (Immaculate Conception) by Jacopo Chimenti, known as “l’Empoli”. Not to be missed, the extraordinary wooden crucifix by an unknown artist of the XVI century who was said to have miraculous powers.