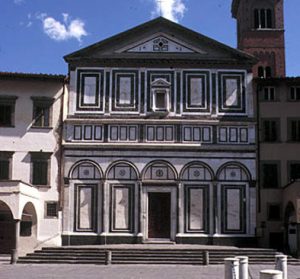 The characteristic facade of this church, with its white and green marble is reminiscent of other examples of the Florentine Romanesque style like San Miniato a Monte or the Baptistery of San Giovanni in Florence. The church dominates the main square of the historic centre of Empoli and is the most recognisable symbol of the town.

Despite the existence of a document dating from 780 which cites the existence of a church dedicated to Saint Andrea, an inscription on the facade confirms the existing building was built in 1093, at the beginning of the Late Middle Ages, when the town of Empoli, like many others in the area began to expand.

Entering the church, one notices that the inside, reshaped during the 1700s and then again after the Second World War is in stark contrast with the typically medieval style of the exterior. The ample nave invites the visitor to head straight towards the main altar to admire a splendid triptych by Lorenzo di Bicci depicting the Madonna in trono fra i Santi Martino, Andrea, Agata e Giovanni Battista.

A short distance, in the left transept lies an icon of the Imaculate Conception, an object that has been highly venerated for centuries. The wooden crucifix from the XIV Century is particularly linked to the history of Empoli, conserved in one of the side chapels and considered to be miraculous for having ended the plague outbreak which disturbed the town in 1399.

The splendid fresco of the Redentore by Raffaello Botticini, still visible on the internal wall behind the facade, is just a taste of the work of this extraordinary painter. Visitors can learn more in the nearby Museum of the Collegiate Church of Saint Andrea.