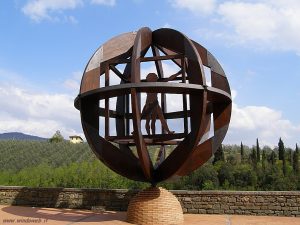 In Vinci, everything refers to  Leonardo. Besides his House, the Leonardo Museum, the Leonardo Library and other places, this itinerary is dedicated to the celebration of this universal genius and to reinterpreting a part of his thoughts.

Mario Ceroli. The Mani of Vinci Donated by the artist himself to the town in 1987, this large wooden sculpture located in the square behind the Castle of the Conti Guidi is inspired by the famous drawing conserved in the Gallerie dell’Accademia in Venice, in which Leonardo represents the idea of proportion expressed by Vitruvio Pollione. The three-dimensional version of this work honours the modernity and dynamic nature of Leonardo’s drawing which has interested Mario Ceroli  since the sixties. The statue, which interprets the renaissance theory of man as a measure of all things, has become the symbol of the town of Vinci and of its strong link with Leonardo.

Nina Akamu. Leonardo’s Horse The equestrian monument in bronze was inspired by the unfinished project for a colossal statue of Francesco Sforza, to which Leonardo dedicated his time to during his first stay in Milan. In 1977, Charles Dent, a passionate enthusiast of the Italian Renaissance, decided to bring an end to Leonardo’s failed experiment, creating the Leonardo da Vinci’s Horse foundation in Pennsylvania and entrusting the artist Nina Akamu with the task of creating the art work. In 2001 the sculpture was donated to the city and placed in the central Piazza della Libertà.

Mimmo Paladino. A square for Leonardo The sculptures of Piazza de’Guidi, carved with glass tiles and silver blades, introduces the visitor to the Leonardo itinerary and the town. It was this idea of an important artwork, able to converse symbolically with the museum itself and with the legacy of Leonardo that drove the City Council to initiate the competition of ideas, which was announced in 2003 and saw the participation of Anis Kapoor, Ilya Kabavov, Joseph Kosuth, Jannis Kounnelis and elected Mimmo Paladino as the winner. The work of Paladino, with its geometrics and abstract forms inspired by a prism, symbol of the Renaissance, evokes Leonardo’s trust in geometrics and gives shape, in the heart of ancient Vinci to a unique and evocative contemporary urban space.

Cecco Bonanotte. Leonardo’s Baptism In the church of Santa Croce where Leonardo da Vinci was baptised, the chapel which still conserves the baptismal font also houses a series of sculptures dedicated to the History of Deliverance, the work of Cecco Bonanotte. The sculptures are unique for the refined delicateness and use of colour that the maestro Bonanotte instils in his creation.

Dialogue over time and space: Leonardo da Vinci and Qi Baishi. Wu Weishan
A tribute to Arts and its capacity to overcome time and improve the dialogue between people and culture: all these elements are visible by the Chinese Artist Wu Weishan’s sculpture. “Dialogue over time and space: the master of the Italian Art Leonardo da Vinci and the Chinese painter Qi Baishi” donated to the city of Vinci on 2020. The sculpture is composed by two bronze statues depicting Leonardo da Vinici and the Master of the modern Chinese painting, Qi Baishi, both intent in a sort of a hypothetical conversation timeless and over any physical distance. The sculpture is located at the external space in front of one of the access streets to the Museo Leonardiano, in Palazzina Uzielli.
This location increases the visibility of the statues, locating them harmoniously inside the surrounding landscape, now and then the same to whom served as backdrop to the birth and childhood of Leonardo da Vinci. 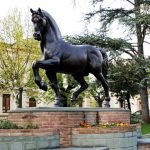 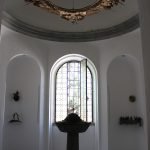 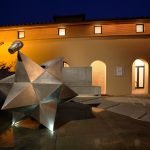