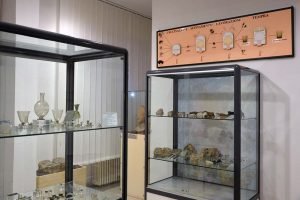 There are about 3,000 archaeological finds exhibited within the permanent exhibition to document the glass production in Valdelsa during the period between the thirteenth and sixteenth centuries, a manufacturing activity that for a long time characterized this territory.

If the availability of raw materials and the central position of the Francigena and Volterrana roads, real arteries of the medieval circulation, contributed to the development of the production and diffusion of glass technology, from the 14th century they were the ‘glass makers’ of Gambassi who travelled all over Italy to export the knowledge needed for the production of ‘gambassini’ glasses.

The first section of the exhibition documents the production of glass in Italy from the protohistory to the XVI century through some glassworks from the territory; In the second sections , there is room for the working tools and the processing waste that tell the history of pre-industrial glass technology, while closing the path are the commonly used items such as glasses, bottles and flasks to witness a glimpse of Gambassi glass makers’ daily life in the Middle Ages.