From Empoli to Montespertoli, following the notes of the great

This area where nature, culture and tradition gives life to a truly favourable ecosystem and a typically Tuscan good way of life, is the land of poets, artists, visionaries and…musicians. In fact, here at the end of the 19th Century the pianist and composer Ferruccio Busoni and the tenor Amedeo Bassi were born, both protagonists of the musical scene of the era and who trod the boards of the most important theatres in the world. This unique itinerary follows the life and success of these two important musicians and the places closely connected to them.

The house of Ferruccio, where music still plays

Walking through the central Piazza della Vittoria in Empoli, which is often animated by events or by just daily life, it is easy not to notice the 19th Century building which was the 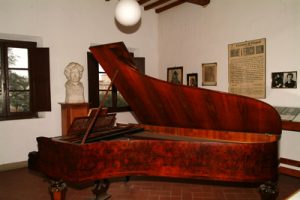 first home of Ferruccio Busoni (1866-1924). The entrance to the house, now a museum and centre for musical studies is however marked with a plaque which remembers the “prince of modern pianos, who dominated, moved and amazed people from all over the world with his great art”. These words certainly invite the visitor to enter and get to know the famous Empoli musician.

In the museum there is an archive and library, you can discover portraits, photos, manuscripts and some autographed libretti. There is also a piano which once belonged to Ferruccio. These objects tell the story of a boy with real talent who at just 7 years of age played in public for the first time and who by 14 had already written 150 compositions; a musician who during his studies met Brahms and Tchajkovsky, travelled and taught in Moscow, Helsinki, Boston and Berlin. He became one of the most famous pianists of his time and starting from a re-interpretation of the classics (particularly Bach) developed what became known as the “Busoni harmony”.

Today Busoni’s heritage is celebrated at the Musical Studies Centre which bears his name and which promotes the teaching of music, organises conferences and meetings and every year between November and March proposes an exceptional programme of concerts. Attending one of these concerts is the best way to pay homage to this extraordinary musician and composer.

Amedeo Bassi, a star of Montespertoli

As you leave Empoli with the notes and melodies of Busoni still in your head, follow signs for Montespertoli, which is one of the most famous Wine Cities but was also home to the tenor Amedeo Bassi (1872 – 1949).  Along the road which winds its way up past vineyards and cultivated fields, try to imagine what this landscape looked like more than one h 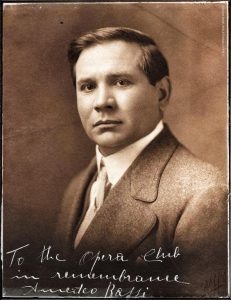 undred years ago when the young Amedeo worked in a kiln and would sing for his work colleagues. His voice however, was unlike any other. It was so special that someone encouraged him to go and study singing with the Marquis Corrado Pavesi Negri. This was the first important step towards a bright career which led him to perform in some of the most famous theatres in Italy and America and at Covent Garden in London where he sang at the coronation of King George V of England.

A visit to the museum dedicated to the tenor in his town allows you to follow the life and success of Bassi, observing the mementos, films and photographs which show him during his most famous performances. You can listen to the voice, so sweet and strong which made this young man from humble beginnings, a true star of his times.

The Festival Amedeo Bassi is dedicated to discovering young opera talents and takes place every August, animating the summer evenings of Montespertoli, celebrating the centuries old tradition of Italian opera. Take our advice and participate in the evening’s events on 10th August when you can enjoy the music while sipping a glass of the excellent Chianti Montespertoli wine during the Calici di Stelle (Glasses under the stars) event!