From Pontormo to L’Empoli, an artist’s itinerary 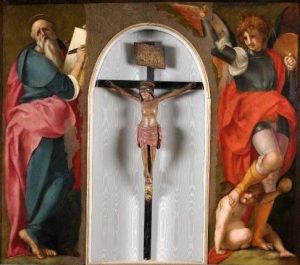 Born over 50 years apart, these two great artists of the Florentine16th Century shared the same name (Jacopo) and the same Empoli origins. This itinerary accompanies you in the discovery of places closely linked to Pontormo and to the artworks of L’Empoli which can still be found today in the churches and museums of the area.

At the home of Jacopo, among thoughts, memories and a frequently copied painting.
As one enters the House of Pontormo, just outside the centre of Empoli, where Jacopo Carucci known as Pontormo (1494-1557) was born and spent his youth, one is amazed by the simply austerity of the rooms. There is no furniture, no tapestries or ornaments which give the impression of a lived-in space, just the narrator’s voice in a multimedia installation which accompanies the visitor in the discovery of Jacopo’s universe and personality. A copy of the artist’s diary where he noted his most personal thoughts tell us about this extraordinary painter of the Mannerism style who was a follower of Andrea del Sarto and strongly influenced by the works of Michelangelo. His link with Pontorme is evoked in the copies of preparatory notes for the creation of various paintings for the nearby Church of San Michele. The Madonna del Libro, which can be admired inside the house is an ancient copy of a painting by Pontormo that was so famous and so appreciated that it became one of the most copied artworks of the 16th Century!

The Church of San Michele in Pontorme
A few steps from the House of Pontormo, the oldest church of the town conserves Jacopo’s extraordinary original altarpiece created in 1519. Designed to frame the wooden crucifix, an extremely sacred object, it shows elderly Saint John Evangelist on the left, captured in a moment of inspiration before he proceeds to write. On the right, Archangel Michael, covered with armour which leaves his legs naked, is depicted in the act of crushing the devil, represented as an adorable putto, recognisable only by his barbed wings. The colours, the movement and the expression on the face of these two subjects are elements which clearly distinguish the work of Pontormo and encourage observers to discover other important works of the artist at the Certosa del Galluzzo, just outside Florence.

Disovering the works of L’Empoli. 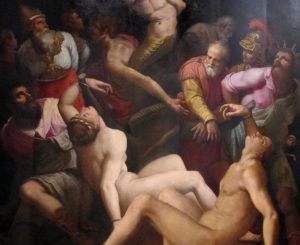 He did not live there and he only worked there for a short while. He owes his nickname to the origins of his father who did come from this area. Today the churches and museums of the Empoli territory are the perfect place for appreciating the extraordinary works of this artist, who influenced by Pontormo himself (in fact he copied some of his artworks at the Certosa del Galluzzo) and above all from the reformed painting of Santi di Tito, is one of the most important figures from between the 16th and 17th Centuries. Proceeding from north to south, we start in Fucecchio, where inside the Church of San Salvatore we find the altarpiece with the Allegoria dell’Immacolata Concezione, a theme particularly dear to painters afer the Countereform, also found in the splendid altarpiece in the Church of Santa Maria a Ripa in Empoli. For this town, to whom he was linked by name, Chimenti painted the fresco of San Giuseppe which can still be admired in the Collegiate Church of Sant’Andrea and the Incredulità di San Tommaso in the nearby museum. Finally, one can see the Vergine assunta e i Santi Antonio abate e Verdiana in Castelfiorentino,in the Sanctuary of Saint Verdiana.

Travel Tips: If you are travelling with children, book the Colours of Jacopo laboratory (e.mail: cultura@comune.empoli.fi.it), a truly unique experience in which you can discover close up the colours, techniques and materials used in the 16th Century in masterpieces like those of Pontorme.