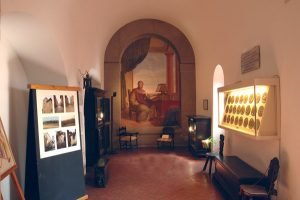 In the heart of the historic centre of Certaldo, along the Via Boccaccio, lies the House of Boccaccio, home to the Ente Nazionale Giovanni Boccaccio, the Museum and the specialist library dedicated to the writer. The current building, opened to the public in 1957, is a true reconstruction of the original structure which was almost totally destroyed by a bomb during the Second World War (the left side of the building with the darker red bricks is all that remains of the original).

Inside the museum we find the Poet’s Room, reported to have been Boccaccio’s bedroom together with some rare examples of shoes from the XIV Century. Visitors can observe the famous fresco depicting Boccaccio nel suo studio (Boccaccio in his study) (1826), work of the Tuscan painter Pietro Benvenuti, commissioned by the Marshioness Carlotta Lenzoni de’Medici who was the first to order the reconstruction and furnishing of the house. The display case of medals contains 20 coins created by the maestro Bino Bini for the VI Centenary of the poet’s death, dedicated to his most famous work the Decameron, and to the protagonists of the ten days.

Not to be missed is the extraordinary specialist library which in addition to housing numerous precious copies of the Decameron, illustrated by important artists and translated in almost all languages of the world, also documents the contribution of Boccaccio and Petrarca to the development of new geographical science during the second half of the 14th Century.

The House of Boccaccio also houses a permanent exhibition of artworks by contemporary artists “Homage to Giovanni Boccaccio, Ten +1” and is the headquarters of the National Association Houses of Memory.