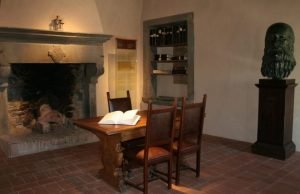 Immersed in the centuries old olive trees of the Montalbano, just a few kilometres from the town of Vinci, among countryside that has hardly changed since Renaissance times, one can find the childhood home of Leonardo da Vinci, a symbol of his links to the city.

Leonardo was born in this simple country dwelling on the 15th April 1452, the illegitimate son of Ser Piero da Vinci and a woman named Caterina. Donated to the City Council of Vinci by its last owner, Count Giovanni Rasini di Castelcampo, the house was opened to the public in 1952 as part of the celebrations to mark the 500 years since the birth of the Genius from Vinci and today it is the destination of numerous cultural pilgrimages.

The rooms document the life and times of Leonardo thanks to an evocative holographic installation which allows the visitor to “meet” Leonardo and take a journey into his personal universe. Several multimedia applications bring together the pictorial and graphic works of this Vinci resident thanks to very high resolution reproductions of his most famous works.