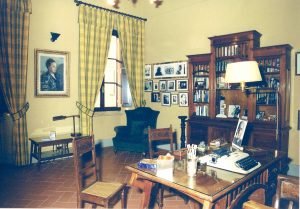 “I owe Milan for what I have become but I owe Fucecchio for what I am, for my character”. These words, often repeated by Indro Montanelli (1909-2001) express his strong link with his town of birth, which was at the root of his personality and frankness which which he conducted his battles and of his incisive writing. Once he confessed: “Maybe in my life I have always been searching for Fucecchio”, a place that remained in his heart, despite his success and numerous travels to all continents. Paraphrasing the words of this great journalist, this itinerary invites the visitor to find Montanelli right in his beloved Fucecchio,.

Indro’s rooms
In Fucecchio, an itinerary dedicated to this extraordinary personality of the 20th Century can only start at the Montanelli Bassi Foundation, established by the man himself in 1987. Here, in the rooms which are rich with history and that evoke the Palazzo della Volta, where during the Middle Ages the writer’s ancestors loved, it is still possible to feel the unmistakable presence of Indro. From 2001, according to the provisions of his will,the Foundation hosts his studies from Milan and Rome which were transferred entirely here and include books, papers, personal items and furnishings which tell us about the personality and passions of Montanelli, much better than any biography could. As one enters the Milan study, one sees the solid wooden desk built by “grandfather” Emilio Bassi at the beginning of the 20th Century upon which the famous Lettera 22 typewriter “rests” after many years of work under Indro’s never tiring fingers. A diary with his last appointments, a favourite chair, books signed by famous literary writers, photographs from the Rome study and the library where all his works are conserved, allow the visitor to see the hidden, more intimate side of the journalist. Montanelli’s link with Fucecchio is furthermore demonstrated by the presence of a collection of works by his co-citizen Arturo Checchi, which he chose to donate to the Foundation.

Villa Bassi, or the cherry garden
In the nearby hamlet of Vedute there is another place that was very dear to Indro. As a boy he spent a lot of time at Villa Bassi, as a guest of the family of Mayor Emilio Bassi, whose children were tutored by Montanelli’s father. In his writing, the journalist remembers the villa as the “cherry garden” and confesses his “dream of Vedute” in which he imagines returning to this place of his youth and meeting another version of himself which accuses him of betraying his origins. The villa is privately owned but is visible from the road.

One last homage
The ashes of Montanelli rest in an urn inside the family tomb in the Fucecchio cemetery. Not everyone know but since the 1950s Indro would note down hypothetical (and we have to say acrimonious) epitaphs for the tombs of famous people which he had the opportunity to meet over his long and adventurous life. He even included himself, writing with great irony:

Understood genius
who explained
to others
what he himself
did not understand.