Journey to the Land of Leonardo da Vinci

It’s a given that Leonardo da Vinci, one of the most famous Italian figures in the world, who has come to embody the idea of genius par excellence, was born in this corner of Tuscany, precisely in Vinci, on April 15th, 1452. Leonardo’s presence in this territory, and in his hometown in particular, is still noticeable today, and the itinerary that follows his steps is one of the most popular and evocative of the entire Empolese Valdelsa area. Let’s discover together the locations of the Genius in his homeland! 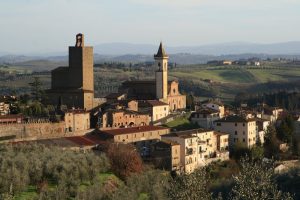 Vinci, where everything talks about Leonardo
The itinerary following Leonardo’s steps couldn’t have started anywhere else than in Vinci, a small town on the slopes of Montalbano, where a real cultural itinerary invites you to discover and delve into several aspects of Leonardo’s life and countless works.
In Anchiano, surrounded by the vineyards and olive groves typical of the Tuscan countryside, we can find his native home, where, according to a centuries-old tradition, Leonardo was born in 1452 on “Saturday April 15th, at 3 in the morning”. Here, a life-size hologram reproduces the features of the artist-scientist and invites you to listen to his words, a thrilling recount of his extraordinary life and of his relationship with this area. Also in his house, you can find interactive apps dedicated to his paintings and drawings, in particular of the Last Supper, entirely explorable following several itineraries of investigation.
After leaving his house, and before heading towards Vinci, a stop at the Villa del Ferrale is a must-do. Here, since June 2018, you can find the exhibitive and didactic section “Leonardo and his painting”, with high-resoluted, full scale reproductions of every painting by the artist: here, gathered in the same place, you can closely observe copies of masterpieces like the Adoration of the Magi, the Mona Lisa, the Lady with an Ermine, the Virgin of the Rocks and other paintings less-known to the great public, complete with texts, interactive exhibits and explicative videos.
Upon reaching Vinci, your attention will be immediately caught by the high tower of the Castello dei Conti Guidi, which undoubtedly dominated the town at Leonardo’s time, and by the campanile of the Chiesa di Santa Croce, where you can still find the baptismal font used to baptise Leonardo. In his town and in the surrounding countryside (his mother lived nearby, in the hamlet of San Pantaleo), Leonardo almost certainly stayed during his whole childhood, and still came back several times after having moved to Florence. In the tower of the Castle, for example, his presence was registered in 1478 in the occasion of the signing of a deed for the concession of a mill to his uncle, Francesco da Vinci.
Today, the rooms of the Castello dei Conti Guidi and of the near Palazzina Uzielli host the Museo Leonardiano, the most ancient gathering of machines and models entirely dedicated to Leonardo’s works. From the studies about flying to the ones about water, from construction to war machines, to the brilliant innovations to modernise the operations of spinning and weaving, the vastity and complexity of Leonardo’s interests is today scientifically documented in the Museum. Next to it there is the Biblioteca Leonardiana, an international centre for records and studies on Leonardo da Vinci, where facsimiles of every Leonardian codex are preserved (available 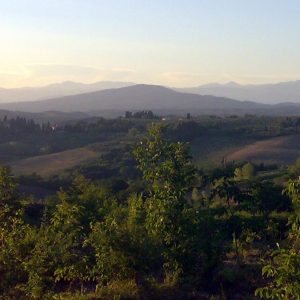 If Vinci is a symbol of Leonardo’s presence in Empolese Valdelsa, the hills of Montalbano are the background landscape of his childhoood and youth. These elevations are still covered by woods and crossed by several streams, and are today filled with hiking paths leading into unpolluted nature, still similar to the one that inspired young Leonardo. Observing the water streaming down the rocks or wild plants, or picking up the fossils which sometimes emerge, it’s easy to understand how these places have left a mark in Leonardo’s memory, to the point that they appear, re-elaborated and rivisited, as the background of his paintings or between the pages of his projects.

The Arno and the Padule di Fucecchio
Leonardo was an artist, an engineer, an architect and also a cartographer! His maps of Valdarno, Val di Chiana and of the Tuscan shore are astonishing for their modernity and detail. They surely indicate Leonardo’s deep knowledge of the territory and represent a sketch of his studies for the grandiose project of a deviation of the Arno river, commissioned to him by Florence in the early 1500s. Numerous pages of his manuscripts show how Leonardo travelled far and wide along the banks of the river, looking for solutions to bring this great project to fruition.
The sluices of Ponte a Cappaiano and the Padule di Fucecchio, which is recognisable in the famous Landscape drawing signed and dated August 5th, 1473, appear several times throughout his codices and can be listed among the “Leonardian” locations.

Finally, to draw a connection between Leonardo and our times, the typical products of these land’s traditions: Leonardo knew so well how to process olives that he designed an oil press, so that part of the work could be mechanised. At the same time, his grandmother Lucia came from a family of ceramists from Bacchereto, and it’s possible that Leonardo had the chance to hang around their workshop and to experiment with the art of working the clay that in this area, as well as in the city of Montelupo Fiorentino, is still being passed on today.