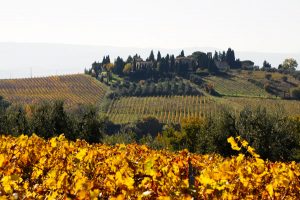 Referred to in sources dating from the VIII Century, Lucardo already existed in the period of the Lombards. The town developed around the castle of the same name and is the most ancient settlement of the Montespertoli area.

In the Middle Ages Lucardo was the control centre of an important land estate but its decline began from 1260 when it was devastated by Ghibelline troops after the battle of Montaperti. Lucardo is located mid-way between Montespertoli and Certaldo, surrounded by vineyards and olive trees and is a typical medieval town built up around a castle and closed within walls (easily visible in the facades of the houses).

Wandering these silent streets it seems that time has stopped centuries ago. Travel Tips: The oldest pecorino cheese of Tuscany, the delicious Marzolino di Lucardo is produced here and was also depicted by Benozzo Gozzoli in one of his famous frescoes, visible today at the Museo BEGO of Castelfiorentino. Try some with a glass of Chianti!