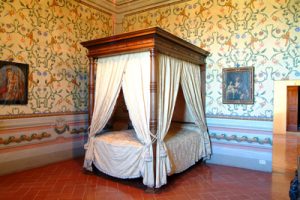 Towards the middle of the XVI Century, the Medici family, now head of the Granducato di Toscana, chose to “adopt” the area of Montalbano and the area of the Padule di Fucecchio and to transform them in to holiday homes for hunting and relax, far enough but also close enough if  necessary to the city of Florence.

Although at the beginning of the 16th Century the Medici family already owned a farm near Stabbia, used to control the fertile surrounding territory and the windmills, the first operation carried out in this area was the construction of the Villa Medicea di Cerreto Guidi, on the wishes of the Granduca Cosimo I. This monumental building was designed by Davide Fortini and was completed by Alfonso Parigi il Vecchio. It is charaterised by the spectacular ramp of steps infront of the villa, known as “Medici Bridges” attributed to the Tuscan artist Bernardo Buontalenti. The villa was used as a base for hunting expeditions in the surrounding areas and is also sadly where Isabella de’Medici tragically died on the 15th July 1567. The young woman, daughter of Cosimo I, was strangled in her bed in the villa by her husband, Paolo Giordano Orsini who suspected her of adultery. Here, in addition to the Historical Hunting Museum, it is possible to visit the rooms of the unfortunate Isabella and admire her portrait together with those of other family members.

Shortly after the construction of the Cerreto Guidi villa in 1573, one of Cosimo I’s sons, Ferdinando, bought and renovated another residence in the area: the Villa Medicea dell’Ambrogiana which looks out directly on the river Arno near to Montelupo Fiorentino. Today it is possible to visit the grounds of the villa which reaches to the river bed and contains a grotto with water features similar to those created for the Boboli Gardens and for other noble residences.

From 1626, over 4000 hectares of ground on Montalbano were surrounded by a high wall (still visible in part along some trails) and became part of the Barco Reale Mediceo, the hunting estate of the Medici family. During this period the villas of Cerreto Guidi and dell’Ambrogiana together with the nearby Villa di Artimino, became important bases for the hunting expeditions organised by the Medici court.

Not to be missed, every year in July in the centre of Cerreto Guidi, Isabella’s Night, evocative re-enactment of the arrival of Isabella dei Medici with a procession of musicians and courtesans, guided visits and a renaissance market.