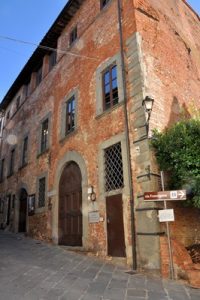 Founded in 1987, following the wishes of Indro Montanelli (1909-2001), the Foundation is located in the Medieval Palazzo della Volta in Fucecchio, the birthplace of the famous journalist. The writer requested that after his death, his books, papers and personal belongings were moved to the house of his ancestors. So, after 2001 the “Montanelli Rooms” were born where his studies from both Milan and Rome were re-built according to their original layout.

The Milan study bears witness to Montanelli’s daily life: visitors can see his favourite armchair, the famous Lettera 22 typewriter, the diary with details of his last appointments and meetings and also his desk. The works of Longanesi, Ezra Pound, Dino Buzzati and a sculpture by Joan Mirò tell us about the life and friendships of this great protagonist of the 20th Century.

In the Rome study, originally located in his house in Piazza Navona where Indro lived with his wife Colette Rosselli, photographs, objects, rare book editions and a series of volumes of 20th Century authors with original dedications to Montanelli or his wife are displayed.