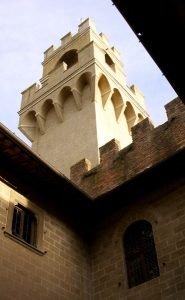 Visible from the Via Volterrana, near to Montespertoli, the unique medieval tower, almost a perfect copy of the more famous tower of Palazzo Vecchio in Florence, is the symbol of this splendid castle which has been turned into a historic residence and a magnificent place for events and receptions.

The castle originally belonged to the noble Acciaioli family, but was bought at the beginning of the 20th Century by the eccentric Sir George Sitwell from England, who in 1921 commissioned the futurist painter Gino Severini to create the evocative fresco La Sala delle Maschere (The Room of Masks), depicting characters from the Comedyof Art.

Note of interest: In 1944 towards the end of the Second World War some important artworks from the Uffizi Gallery were hidden here, including Botticelli’s Primavera and Giotto’s Madonna di Ognissanti and thus kept safe from the German bombardments.