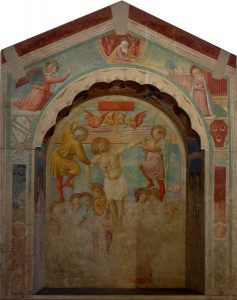 Housed in an Augustinian convent of the 15th Century, the museum is located between Palazzo Pretorio and the House of Boccaccio (part of the same museum complex) and is accessed from the nearby cloister of the Church of Saint Jacob and Saint Philip. Like many other museums of sacred art, it collects the works of art, vestments and the goldworking from nearby local churches and the seven rooms contain true masterpieces such as the famous wooden crucifix depicting Christus Triumphans, Christ triumphing over death, attributed to an anonymous Tuscan sculptor of the XIII Century. The room which was once the refectory of the convent today houses the pinacoteca where the Madonna in trono col Bambino e due Santi of the Maestro del Bigallo and the Madonna in trono col Bambino e due Angeli of Meliore di Jacopo can be found, both masterpieces of the XIII Century.

A particularly interesting piece is the silver reliquary depicting the bust of Beata Giulia created towards the middle of the XVII Century by the Florentine goldsmith Paolo Laurentini. At the end of your visit, enjoy a moment of peace in the peaceful cloister or in the Hortus Conclusus,  the characteristic garden with aromatic  and medicinal plants which was very important for every medieval convent.