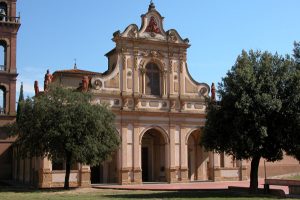 A short distance from the Church of San Francesco, in the centre of Castelfiorentino, this church has been dedicated for centuries to the patron of the city, Saint Verdiana.

The saint lived for 34 years in the spot where the Sanctuary is located today. Legend has it that she shared a small cell of the previous Oratorio di Sant’Antonio Abate with two vipers who tried in vain to make her abandon the life of a recluse and who are often visible in iconographic representations. The facade of the Sanctuary is decorated with white and cold plaster decorations which are a rare example of Baroque architecture in the Valdelsa.

Of the original medieval church, where the original Santa Verdiana fra le serpi was located (now displayed in the museum next door), the cell of the saint remains. There are also other traces under the Sanctuary which was renovated in the 18th Century.

The inside of the church, designed by the famous Florentine architect and sculptor Giovan Battista Foggini, favoured by Granduca Cosimo III de Medici, is decorated with frescoes with lavish forms of the Baroque. The lateral naves are decorated with the Stories of Saint Verdiana, painted by Agostino Veracini in joyful colours.

Not to be missed is the main altar in rocaille style and the splendid painting of Jacopo Chimenti, known as L’Empoli depicting the Vergine assunta tra i santi Antonio abate e Verdiana.