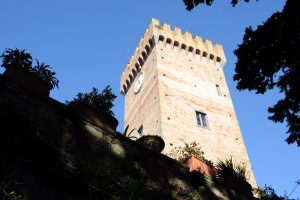 This castle located on the outskirts of Montespertoli conserves its Medieval appearance with its imposing tower. The castle originally belonged to the Conti Alberti family and then to the Machiavelli family but today carries the name of its most famous owner, Sidney Sonnino (1847-1922). The true character of this extraordinary politician, Prime Minister for two brief periods and a significant Minister for Foreign Affairs for Italy from 1914 to 1919 during the First World War, is revealed in the rooms of this castle where he carried out his private life. Sonnino welcomed many important guests to the castle including Francesco Crispi, Giovanni Giolitti, Gabriele D’Annunzio, the kings Umberto I of Savoia, and Vittorio Emanuele III.

Today the castle is a splendid historic residence and important agricultural business and  also houses the Sidney Sonnino archive, the private library (which can be visited by appointment) where the politician passed his time studying the beloved Dante Alighieri and the Study Centre dedicated to him.