The Church of San Leonardo

This Church stands next to the Villa Medicea in Cerreto Guidi, where the family of the Grand Duke c 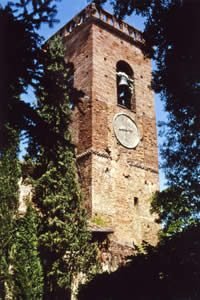 ould directly access it. The Church already existed in medieval times as the chapel of the castle of the Conti Guidi family. Today only the crenellated bell tower, which resembles more of a tower than a religious building, reminds us of the medieval origins of the church. The facade which is proceeded by a portico and the interior are the work of renovations which have taken place over the centuries and led to its almost complete reconstruction in 1827.

There are many works of art inside the church, including the Baptismal Font in coloured glazed terracotta, created in 1511 by Giovanni della Robbia, with its depictions of the stories of the life of St John the Baptist. There is also the Madonna in Trono col Bambino tra i Santi Paolo e Leonardo, attributed to Ridolfo del Ghirlandaio. Other art works which are evidence of the important role of the Church between the 16th and 17th Centuries are the Visione di San Bernardo by the painter Giovan Battista Volponi known as “Scalabrino” and the canvas of San Leonardo attribuited to Cristofano Allori, while none of the crucifixes currently in the Church seems to correspond to the one created by Giambologna, donated by Cosimo I.