The Church of San Piero in Mercato

The Church, consacrated in 1057, is one of the oldest in the Valdelsa region and together with the nearby village of 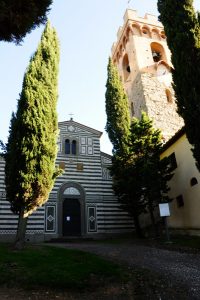 Lucardo, it makes up the original nucleus of the town of Montespertoli.

It was once a marketplace, to which it owes its name and was the centre for religious, social and economic activities of Montespertoli for the whole of the Middle Ages, losing its function only at the end of the XV Century.
The facade was significantly restored at the beginning of the 20th Century with green and white marble decorations but traces of its original features remain in the imposing bell tower and in the sober interior, sub-divided into three naves by pillars and arches where the splendid baptismal font in engraved marble dating back from the XII-XIII Century still remains.

Not to be missed, the nearby Museum of Sacred Art which displays precious artworks from the Church of San Piero and from other churches in the area.