The Churches of the Montalbano 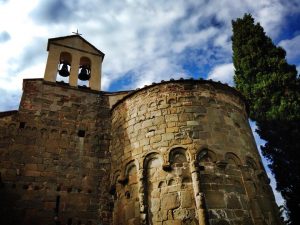 The hills of the Montalbano, a crossroads for pilgrims and travellers since ancient times, are still today dotted with churches and oratories which represent historical devotion and (often unknown) jewels of the medieval and renaissance periods. This itinerary which starts from Capraia e Limite and ends in Vinci, touches some of the most important churches and abbeys present in this area of the Montalbano.

Abbey of San Martino in Campo
Via S. Martino in Campo, 1 – Capraia e Limite
On the road which leads to Carmignano one finds this ancient Benedictine monastery, founded between the X and XI Century as a place offering hospitality to travellers who crossed the ridges of the Montalbano, connecting the river Arno with Pistoia. The original parts of the medieval church which has been partly restored are just the apse, the foundations of the first bell tower and two of the three naves. Not to be missed, the architrave on the right side, decorated with a Christ intertwined with animal figures.

Church of San Jacopo a Pulignano
Via Vicinale Pulignano, 30 – Capraia e Limite
Not far from Castra, this small XII Century church is a clear example of Romanesque architecture with the stone facade decorated with just the characteristic lunette above the entrance. Inside, at the end of the only barrel vaulted nave, there is the apse where the cast of a splendid bass-relief depicting a duel between knights can be found, an unusual subject within a religious building. 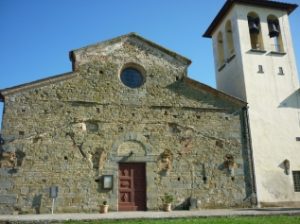 Maybe one of the oldest churches of the Montalbano, this splendid Romanesque church in the middle of the hamlet of Sant’Ansano in Vinci dominates the surrounding countryside with its impressive facade. Inside, the church is divided into three naves with splendidly decorated semi-circular arches which conserve the relics of San Bonifacio and Sant’Ansano and among other art works, an altarpiece of the Giotto school (XIV Century) depicting Sant’Ansano fra due angeli (Saint Ansano between two angels), attributed to Puccio di Simone.

Church of Santa Maria a Faltognano
Via di Santa Maria, Vinci
This church, which already existed in the XII Century but which was entirely rebuilt in 1895 in the Neo-Reniassance style, can be found on a panoramic terrace in the locality of Faltognano. The building itself does not conserve significant traces from its past but it is worth stopping on the green grassy area in front of the church to take in the breathtaking landscape of the Arno valley from under the branches of the holm oak tree dating back from the 18th Century.

Church of San Pietro a Sant’Amato
Via di Sant’Amato, Vinci
Last stop on the itinerary, it can be reached on foot along track 16B from the car park of the House of Leonardo in Anchiano. According to local tradition, this church was founded by the Countess Matilde di Canossa in 1100 and still conserves today the facade and the semicircular apse in the Romanesque style. Worth a visit during July weekends when the small town comes to life during the Sant’Amato a Tavola festival where visitors can enjoy local dishes while taking in the enchanting sunset.