The natural area of Arnovecchio 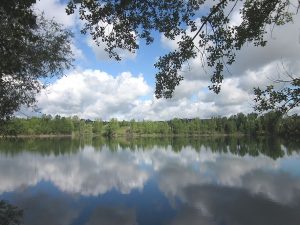 At the “gates” of Empoli, the protected area of Arnovecchio represents a very special natural environment: on the one hand, because it is home to different types of plants and numerous animal species; on the other because it is the unexpected result of several human interventions.

The area is located where originally flowed a meander of the river Arno – hence the name – which was rectified in the sixteenth century at the behest of Grand Duke Cosimo I de’Medici. What used to be the river basin was slowly filled in, laying the foundations for the construction of the Grand Duke’s Tinaia farm.

In much more recent times, for a few decades starting from 1966, this same area was used as a quarry for gravel extraction, an activity that led to the formation of artificial lakes which today are the ideal habitat for ducks, ducks and other water birds.

The natural oasis can be visited by following a nature trail along which there are four points for the observation of wild animals. The area is also fully accessible for people with motor disabilities and equipped with braille signs and tactile panels for the blind and visually impaired.